RSS
← The Old Town by Night
Let’s Hit the Beach! →

Once we’d got ourselves sorted on Friday morning, we figured out the bus system and got ourselves to the nearest Libertas office to buy some 24-hour passes, then got the bus along to Dubrovnik Old Town; so much easier than walking!

We’d already explored a lot of the Old Town on the previous night, so we decided to head off the main street and explore some of the back alleys. The real “tourist tat” was seemingly kept to a minimum, but there were a lot of jewellery shops (featuring the local red coral), art galleries, plus the usual selection of bars and cafes. We found one that we’d read about that did fancy wine and local craft beer; as we ‘accidentally’ found ourselves wandering past it, we had to go in… 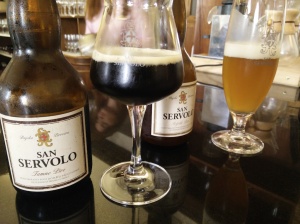 Our host had recommended a restaurant away from the main street (Stradun), telling us that the fish was very good, and the prices were much more reasonable; he wasn’t wrong. Plus, the view was pretty good too…

While eating lunch we’d noticed a lot of people appearing from round the back of Tvrđava sv. Ivana, looking like they’d just been swimming, so after we’d finished stuffing ourselves we waddled round the old harbour to have a look at where they’d been. A groyne and the path round the back of the tower formed a swimming area, complete with water polo ‘pitch’, covered in people both in and out of the water, and great views of the coast south-east of Dubrovnik, the nature reserve of Lokrum island, and the huge variety of passing large and small boats. We naively didn’t have our swimming costumes, but managed to find ourselves a spot on the edge that was close enough to the water that we could sit and splash our feet whilst soaking up the sun and doing some digesting.

Once we felt capable of walking properly, we heading out around the outside of the old town, and up to the cable car that leads up Srđ and provides easy access to Utvrda Imperial (Fort Imperial), built during the Napoleonic Wars. The mountain was the main site of fighting in the Siege of Dubrovnik during the 1991-1995 Croatian War of Independence; the fort itself now houses an exhibition detailing its events. Possibly slightly one-sided, but still very thought-provoking.

After exploring the fort (including access to the roof, which would contravene all sorts of H&S regulations in the UK), and having an unexpected encounter in the car park, we decided to treat ourselves to a drink at the imaginatively-named Restaurant Panorama, which has absolutely amazing views over Dubrovnik Old Town and the Adriatic Sea. This left us perfectly-timed for catching the sunset from the viewpoint near the cable car station, watching it sink into the sea over Dubrovnik, Koločep and Lopud.

We had a cunning plan for getting back to our apartment after this: the number 8 bus runs in a big loop, from the Old Town Gate, though ‘lower’ Dubrovnik to the port, then turning and heading back along the higher road (at the bottom of the steps to our apartment), past the cable car station, out east to Viktorija, then back to the Old Town Gate. Just get on at the cable car station and ride round the loop, we thought… well, almost. What we didn’t realise was the bus got to Viktorija and stopped for 20 minutes! We had to get off and stand around; couldn’t even admire the view, since it was dark by this point. Eventually we were allowed back on, and things proceeded as planned, including being smug at having seats when the crowds got on at the Old Town Gate. Little things…

Posted by Paul on Wednesday 19 August 2015 in Croatia, Travel