The Old Town by Night

After spending our first morning local to the apartment, and having a nice siesta to recover from the heat and a morning of walking down then up countless steps (a theme which is to be repeated), it was time to get down to the business of why we have made this trip: to tick Dubrovnik Old Town off our (OK, MY) seemingly endless must-see list.  Our host had already given us some tips on what to see, where to avoid (overpriced bars in particular) and how to get there and back (downhill, so walk there; uphill, so get the No. 8 bus back). After about 15 minutes walking, we finally started descending steps which seemed never ending. “Thanks goodness we’ll be getting the bus back!” I remarked.

We finally emerged from the steps just outside the Pile Gate, on the eastern edge of the walled city. Despite the time of day it was still heaving, though apparently less so than during the day as all the cruise ship day trippers had now left and would be back on board their ships. We walked past the various stands touting their ‘Game of Thrones’ walking tours (Paul had already been warned this was NOT an option), contemplated then decided against buying a tourist card, and set about battling with and against the crowds to get into the old town.

Perhaps it was because it was somewhere I’ve wanted to go for so long, or perhaps it was real, but I noticed a change in the atmosphere almost immediately. I felt I was somewhere very special. The walls and buildings were so well lit they seemed to shine against the dark sky. It was a strange feeling, almost like I had entered film set, or some other make-believe location. Or maybe I was just dehydrated and had come over all weird. Anyway, it felt good to be there. We walked down the wide main street, Stradun, which was teaming with people ranging from those who looked like they had just come from the beach to those all dressed up in designer gear ready to hit the bars. The pavement is made of limestone and is famed for its high shine finish which has been polished by hundreds of years of use. For some reason I couldn’t help but think it must be very slippy in the rain! 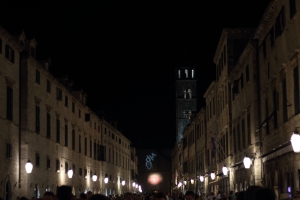 After the tourist shops at the start of the street, the restaurants and bars take over and the pavement becomes a mass of tables and chairs. It certainly was a great place to people watch, but at the same time it seemed lots of the people there wanted to be watched! In between were lots of side streets which were themselves lined with more restaurants and diners eating outside. We resisted the temptation to join them as we were more interested in exploring.

We kept wandering, having little to no idea where we were, but figuring we couldn’t get that lost. Despite it still being stiflingly hot, it was so lovely checking out little alleyways and sweeping staircases leading to small chapels and beautiful old doorways. We found ourselves in more of a residential part of town and seemed to have left all the bars, restaurants and most of the tourists behind. We noticed ahead of us that a group has turned into a hole in the outside city wall, followed by others coming out. On investigation it was a bar on several levels, carved out of the rock face outside the city walls. It was about time for a sit-down, so we followed. Due, I assume to the difficulties they must have getting drinks to the bar and that there appears not to be running water, it is a bottles-only bar with everything served out of plastic glasses. Fair enough.

We ordered a beer and mini bottle of sparkling wine. It turns out the bar, Buža is rather famous for its stunning views of the Elafitia Islands and was recommended in our guide book. I’m quite sure the view was indeed stunning, so we sat back drinking the most expensive round of the holiday so far, and stared out into the blackness, trying to imagine what it would have been like had we sensibly visited in day time instead. 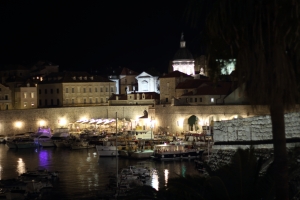 After more wandering around, we thought it was time to head off for the bus. After all, we were coming back the next day and could see more then. Although we knew what bus to get from where, we hadn’t figured on the huge queues and chaos of the bus stops back outside the Pile Gate. We realised buses were leaving, full, still with long queues left, the one we needed being only half-hourly at that time of night, and the next one being the last of the night at 12.30am. Hmm, what to do? Then the inevitable happened. The words I have been dreading. “Why don’t we just walk back? We’ll be there before the next bus gets here.” Of course I knew he was right (annoyingly), so off I trudged up the steps, loosing count somewhere in the early 200’s.

Tomorrow we would return. By bus.

Posted by Clare on Tuesday 18 August 2015 in Croatia, Travel