We left Willoughby to head to our ‘primary’ destination for this trip: Indianapolis, for the MotoGP.

There were a few minutes of slight concern when we arrived at the hotel that had been booked for months and months: they didn’t have a room for us! Apparently Expedia had been trying to contact Clare regarding an alternative, but had only sent an email through when we were about an hour away from Indianapolis, with a contact telephone number that went through to the wrong department…

Fortunately, the hotel realised they could find us a room, one which just had some maintenance done, as long as we could wait an hour or so for the duty manager to prepare it for us. That suited us: we went and did our shopping (sandwich supplies and beer), then checked in.

The first motorcycle-related activity of the weekend was a trip to the local Ducati dealers (the imaginatively-named Ducati Indianapolis), where they were having an open day, and there were rumours of a visit from the Ducati Corse team…

Our sat-nav decided to take use some ‘imaginative’ routing to get to the store, through what seemed like the car park for some industrial units, but we knew we were in the right place when we spotted a very obvious big red truck.

Of course, there were a load of motorbikes parked up around the store, including something that might be suitable for my Mam if she wants a change from big 4WDs. We couldn’t take advantage of the various test rides that were on offer, so had to make do with wondering around the store being quite amazed at how cheap the motorbikes were, compared to UK prices. Of course, I had to buy a couple of Ducati T-shirts that were on offer while I was there, and a 1:18-scale model of a Multistrada somehow accidentally got added to my bill.

It wasn’t long until one of the store managers took a phone call and told everybody that “they” were 10 minutes away; “they” being the Ducati Corse team, of course. We expected them to turn up in limos, or at least Ducati-branded cars, but a couple of nondescript 4x4s turned up and pulled round the back of the store, one of them being driven by Cal himself!

The team were lead out of the store to a round of applause, and the riders (Cal Crutchlow and Andrea Dovizioso) very quickly got down to the business of signing posters and posing for photos. Clare had a quick chat with Cal, told him we’d come from Newcastle just to see him (he asked where the translator was), and that we’d been in Brno last year to see his pole position qualifying (he pointed out that he’d crashed out of the race…) Also in attendance were Paolo Ciabatti (Ducati Corse Sporting Director) and Julian Thomas (MotoGP Press Manager), probably making sure that nobody said anything that they weren’t supposed to. Somebody in the crowd had a Mini done up in Union Jack wrap and Cal-style number 35, so there was more opportunities for photos, and for Cal to autograph the car.

With the excitement over, it was time for the quickest Japanese meal we’ve ever had (trying to take my bowl away while I was still eating), then back to the hotel to prepare for three days of racing.

… but Cal seems much better at it, despite the Geordie/Coventry language barrier.

Surprised he hasn’t got one of these himself!

Posted by Paul on Thursday 14 August 2014 in Travel

A few years ago, shortly after joining Facebook (I know, I know), I saw a number of friends had completed something called a Travel List Challenge, ticking off the countries they had been to. It suggested that “most people will have been to fewer than four countries”. Really? Given they must live in one of them, I was surprised by the notion that “most” people may only have visited two others!

I did the challenge and got 26, slightly above the actual user average of 24, and more than any of the friends who had taken the quiz. I felt quietly smug with myself by how well-travelled I must be. Then I thought about all the countries I HADN’T crossed off. Hmmm, there were lots, like REALLY lots. Damn. Then I didn’t feel so smug. I knew I needed to get myself travelling.

“The List” has now become an obsession. I’ve been to some fabulous places that I’d love to revisit and countries that I’d like to explore more, but I now have this little voice inside me, telling me that doing so would be wasting opportunities to see even more of the world. I love going to new places, enjoying the local food and drink, trying to speak a few words of the local lingo and experiencing the culture of the area. I really do want to see more of the world in order to see what’s on offer, challenge myself and expand my mind, though I am starting to worry that more than that, I just want to tick countries off a list!

There is of course the matter of time and money to consider. I’m a teacher so have lots of holidays, but only at given times of the year. My husband however isn’t a teacher so is far more limited to how long he can be away for. And travel isn’t cheap, especially at the times of year when I am able to go. Whilst I love a fancy hotel room, I simply don’t earn the money to pay for them. I realise that there is a compromise to make and so I’m ever more happy these days to stay in a cheap and cheerful motel room, and actually thoroughly enjoy camping when travelling around. I really don’t think I could do a hostel though; I never did the backpacking thing when I was younger and think it’s too late to start now.

I’m also learning to live without some of the creature comforts I would at one point have insisted on: I am actually writing this on holiday in Canada where I have come away for THREE WHOLE WEEKS without my straighteners. I know, I can almost hear the gasps from the girls reading this! Other things I’ve learned to cope with are nasty toilets (I thank China for that one), difficulties communicating (ditto!), not showering every day, and long, sweaty bus journeys (cheers to Kenya on both counts!). I’ve never been that bothered by unpleasant smells, unusual insect life or strange animal noises at night thanks to a childhood in Nigeria.

So….. for the past three years, all my holiday planning has been based on how many new countries I can visit (and spend quality time in; it’s not just a case of quickly passing through). Last year we managed a 3,000 mile road trip around Europe, crossing off Austria and the Czech Republic (as well as revisiting Switzerland, Germany and France). As followers of the MotoGP racing series, the idea of heading to the round in Brno, Czech Republic, seemed the perfect excuse to make the trip.

The idea for our current trip was mooted whilst in Brno: a quick check of the racing calender showed that the Indianapolis round is also during the summer holidays. Of course, I’ve been to the USA before, but another quick check of a map showed its relative proximity to Canada which I hadn’t visited.

Posted by Clare on Wednesday 6 August 2014 in Travel

We had a very nice little (if a little twee) B&B booked for Niagara, about a mile up the road from the falls (and the main hotels). As we discovered later, this was a very good move: the centre of Niaraga Falls is pretty grim. The big hotels seemed to be just plonked in the middle of run-down residential areas; the restaurants and bars all look dirty and tacky.

On first sight, the falls didn’t seem as impressive as I expected. I thought they were going to be much, much taller. It’s hard to get an idea of how much water is going over them… until you get up close to them on the boat, or see how wide the river is above them. 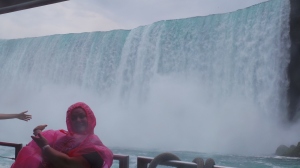 Since Monday was the Canadian “Civic Holiday” (yes, that’s what it’s officially called), there were fireworks over the illuminated falls on Sunday evening.

On Monday, in between doing the White Water Walk and the Niagara Falls Boat Ride, we went for a drive, following the river north towards Niagara-on-the-Lake. The original plan was to find a winery, but by the time we got parked up in the town, we decided to just find some lunch and have a wander around. Apparently the town was modelled on Stratford-upon-Avon, and it shows… it’s even more twee than our B&B.

A little reminder of our wedding:

And finally, that’s what you call a sandwich:

Posted by Paul on Monday 4 August 2014 in Travel