A Walk in the Park

On Sunday morning, rather than going into school, I decided to have a bit of an explore by myself. I’d heard there was a nice park nearby, and I’d seen a green-coloured area on the map provided by the hotel (to be returned at the end of our stay!), so I headed for that. It turned out to be a different park to the one that people had been talking about, a little further away but definitely worth the walk.

Heading into the park, the first thing you encounter is a very fancy-looking bridge which is just being finished off. This is quite surprising, as I get the impression that much of the rest of the park was completed for the 2008 Olympics, and many things in China don’t seem to get updated once they’re done, but it’s clear that this park is being kept up-to-date.

Through the main entrance, past the Garden Notes, you can see the top of the large sculpture which I suppose is meant to evoke the Olympic rings, and start to encounter many of the Olympic-themed pieces that are scattered around the park.

There are plaques on the ground with some statistics for each of the modern Olympics; apparently the 1968 Mexico Olympics was “the first time, the gender and tonic checking was officially applied.” Who knew?! There are slight mistranslations like this everywhere in China; whoever does their proof-reading should be who shot… I mean, fired… actually, it’s China; I was probably right first time.

When you get in to the main area of the park, everything becomes very tranquil. It almost seems too stereotypical that there’s an old man sat in the shade by the edge of the lake, bike parked behind him, playing his erhu.

Wandering around the various spaces in the park, each with its own identity, you’re likely to encounter more stereotypes: a middle-aged man doing Tai Chi, or a group of old woman doing their daily exercises.

The lake itself features a large water fountain feature, which occasionally starts and spouts water in time to some gentle chiming music issue from hidden speakers in a pile of rocks at the side of the lake.

Leaving the park and getting back to the hectic traffic comes as a complete shock to the system, like being woken up by a loud alarm clock. As usual, more tower blocks are being built wherever you look. I walked past rows of car workshops: the “workshop” is actually the street, where I saw everything from oil changes to engine rebuilds being done; the buildings only seem to be used for parts storage. I also found the local equivalent of B&Q: outside, rows of tradesmen are waiting with their scooters, advertising their services by the tools attached to the back seat. Painters with rollers, builders with drills, carpenters with saws, etc.

Further on, I found small lanes lined with market stalls. Having no-one with me to act as a distraction while I took photos, I didn’t feel like I could take pictures on individual stalls, so maybe I’ll have to go back with an accomplice.

I’m still trying to get a good photo to capture the craziness of the traffic, but you get some idea on the photo of the junction: all those vehicles just keep moving, nobody ever seems to come to a stop.

Returning to the hotel, past where some drains are still bubbling up foul smelling water, I was glad to see that somebody had put a ‘wet floor’ sign out; I might never have noticed otherwise!

Posted by Paul on Tuesday 7 August 2012 in China

Had a walk round this morning, including a trip through the Garden Park (or to give it its full title, Qinhuangdao Economic & Technology Development Zone Garden Park). More pictures from there in a separate post, but I thought the park rules were worth sharing separately, for your amusement:

Forest Park is a opened public welfare park in the Development Zone. For neat , grace and safe environment, visitors should follow the principles below:
1. Keep off the grass and trees ,don’t trample on the lawn or discount flowers.
2. No smoking in the fire district area
3. Any unit or individuals shouldn’t gathering or organising activities in the park without approval.
4. Protect the environment of the park ,don’t drop litter , spitting or defecate indiscriminately.
5. Don’t catch birds. No fireworks allowed in the park.
6. Please to be a civilised person. Do not climbing, trampling, laying, swimming or do things that may threatened others’ safe.
7. Don’t selling in the park.
8. Dangerous items and pets are not allowed to be taken into the park.
9. Please take care of facilities in the park, do not scribbling.
10. Please do not make a racket, begging or alcoholism. Do not fighting and gamble.
11. Motor vehicle and Non-motor vehicle (except the baby carriage wheel chair) please do not enter the park.
12. Please observe the clauses above. The Park Administrative Office have rights to inculcate and fine the visitors who ignore the advice. For the impudent visitors ,Park Administrative Office have rights to call the Public Security Organs.

So, consider yourself told! 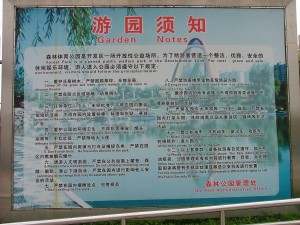 Posted by Paul on Sunday 5 August 2012 in China