As I needed to make some bread, I thought it would be a good excuse to try out a couple of my Christmas presents: a baguette tray and an oval banetton.

Rather than being fancy with the ingredients, I just used a straightforward dough: strong white flour, yeast, salt, and water. Doesn’t get much simpler than that.

Mix, knead, rise and knock-back a couple of times, then split the dough: half for the banetton, three sixths for the baguettes.

The baguettes were formed by just flattening and rolling up the dough. I wasn’t sure what the best way to form the bread for the banetton, so I went for the ‘stubby cylinder’ method from the River Cottage bread book: flatten, roll up, flatten, fold by thirds and flatten to a square, then roll up again.

Everything got a nice coating of rye flour, then left to prove before having the tops slashed and placed in the oven.

The results look pretty good, although I think I need more (or possibly deeper) cuts, especially for the loaf from the banetton. Not bad for the first go, though! 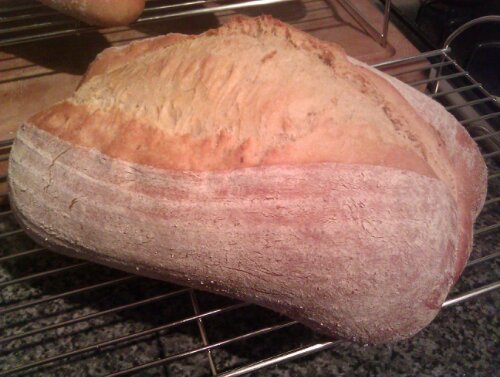 Posted by Paul on Sunday 6 January 2013 in Cooking, Uncategorized