We had a very nice little (if a little twee) B&B booked for Niagara, about a mile up the road from the falls (and the main hotels). As we discovered later, this was a very good move: the centre of Niaraga Falls is pretty grim. The big hotels seemed to be just plonked in the middle of run-down residential areas; the restaurants and bars all look dirty and tacky. 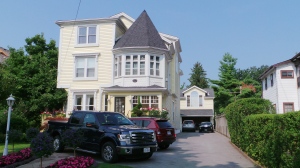 On first sight, the falls didn’t seem as impressive as I expected. I thought they were going to be much, much taller. It’s hard to get an idea of how much water is going over them… until you get up close to them on the boat, or see how wide the river is above them.

Since Monday was the Canadian “Civic Holiday” (yes, that’s what it’s officially called), there were fireworks over the illuminated falls on Sunday evening. 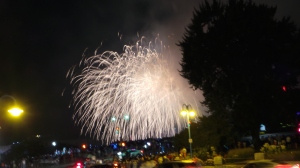 On Monday, in between doing the White Water Walk and the Niagara Falls Boat Ride, we went for a drive, following the river north towards Niagara-on-the-Lake. The original plan was to find a winery, but by the time we got parked up in the town, we decided to just find some lunch and have a wander around. Apparently the town was modelled on Stratford-upon-Avon, and it shows… it’s even more twee than our B&B. 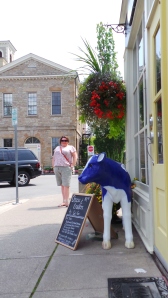 A little reminder of our wedding:

And finally, that’s what you call a sandwich: 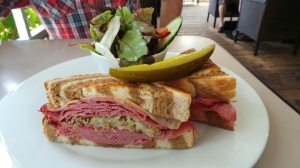 Posted by Paul on Monday 4 August 2014 in Travel